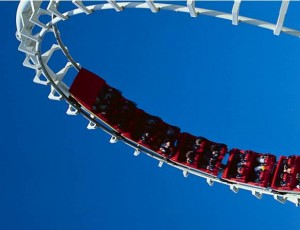 I could hear the fun fair almost as if it were at my doorstep, the sounds of laughter, music and amplified voices enticing me in. Soon, I would be at the epicentre of the innocent mayhem as I had arranged to meet some friends there this rather sunny bank holiday afternoon. I left my grown-up apartment, mounted my bike and like an excited child made a headway toward the fair. I wondered what rides would be in store for me to sample or perhaps fearfully decline, maybe I might take a goldfish home or win a prize of some sort. The thought of candy floss and other sweet toothed offerings gave me a good reason to smile all the way.

On arrival at the fair I did feel a slight sense of surrealism. The large green open space that lay dormant for most of the year apart from the occasional dog walker or day dreamer had awoken. The first thing I noticed was the Donkey Derby taking up centre stage in the middle of the park. There were crowds all around the track, cheering on their young jockeys while the compere provided the necessary race commentary. It had all the vigour of race day at Ascot, the lack of champagne and fancy hats perhaps the only things amiss. The area between the Derby and numerous stalls dotted along the circumference of the fair provided a human motorway of families, pushchairs and young children, all eager to take the fast lane toward the next adrenaline fuelled activity.

As I looked beyond the race track, the emerging metropolis of rides rose up behind, the sounds of screams and frightful cheer filled the air around them. To ride or not to ride? I was already making some pre-determined decisions, hopefully my friends would not be too forceful. After an initial hunt, I finally met up with them and we proceeded to share observations of the day and memories of a time spent at fairs as youths. The latter was not so much on our side today but the smell of candy floss and toffee apple filled the air around to remind us. There was little room for manoeuvre now, the proximity of the crowd with their youthful banter in tow almost too close for comfort. Everywhere I looked reminded me of days gone by; there was the whizzing Waltzer ride opposite, one of which I’d always been slightly fearful of and the bumping Dodgems to the right with their menacing electrical stalks that caused sparks to scatter overhead, the latter occurrence had always startled me as a child. There were small circular fun fair stalls with all manner of things hanging down, waiting to be claimed and taken. The atmosphere was at its most intense and the hypnotic humming from the machinery nearby only added to the moment.

Having spent some time on the rides, playfully teasing each other and thoroughly enjoying ourselves in the process, my friends and I decided to take a break and walk around the endless array of stalls. Situated in a less frenetic part of the fair, they were selling all manner of things including food, drink and local delicacies. Some were advertising activities on offer such as youth organisations, voluntary work, even Tarot Card reading. For me, my future was probably best left uncertain, so I acknowledged the lady’s presence but walked on by. As I looked up ahead, streams of new arrivals were coming toward me, I’m sure that Tarot Card lady would be fine.

I left the fair with a feeling of youthful zest and vigour. A brief sense of renewal and self-discovery had just taken place, I felt content. It is amazing what a mixture of excitement, amusement, smells and nostalgia can do for a person. My childhood had returned briefly, how I wish it could have lasted just that little bit more. As I meandered around the streets, twisting and turning, my bike providing a temporary wind tunnel, the sight of my dwellings with the car parked nearby reminded me that I was now an adult once again.