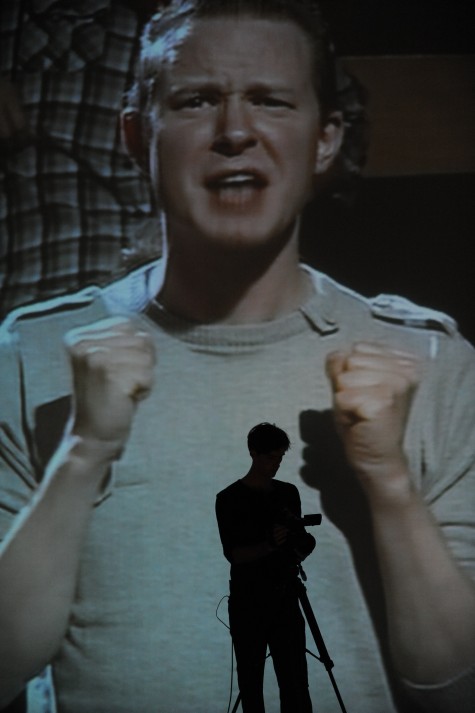 Admittedly, I had read some reviews on my way to see The Audience at The Soho Theatre in London. Anyone that has been will know you really shouldn’t be doing this; it’s all about the element of surprise. So perhaps the edge had been taken off slightly but then again I do like to know what I’m letting myself in for.

When I saw the word ‘interactive’ in the description, my comfort zone gradually began to tighten its grip.

Perhaps this wasn’t such a good idea after all. I didn’t want to be picked on or subjected to scrutiny from a stranger in front of a crowd I have no knowledge of whatsoever. These are just my thoughts. For somebody else it would provoke an entirely different reaction and perception. It’s partly the reason that The Audience appeals to many, it teaches us much about ourselves and how we interact with others. Since its inception to becoming a hit at the Edinburgh festival this year, Belgian theatre group Ontroerend Goed have managed to create a sense of danger and controversy on the stage. This must be good for ticket sales of course, but in a world where we have become so desensitized to things, how bad can it be?

On entering the small top floor auditorium, it was suggested we take the seats at the front. The offer was not taken up lightly, after all, nobody wanted to be an easy target – think back to your school days and sitting at the front of the class. As we took our seats, I did start to feel a bit on edge and quite vulnerable. Despite a glass of red wine in hand, the fear of the unknown was gradually rearing its ugly head. This was diminished somewhat during the introduction when the compere, a young attractive woman proceeded to go through protocols including when to clap and toilet visiting etiquette. It didn’t seem so bad but then the huge screen behind her reminded me that this was just calm before the storm. Minutes later, a man with camera walked calmly onto the stage, directing it around the audience very slowly in an almost graceful like manner. The screen overhead then sprung into life and there we were in our full glory. As the camera moved around, it stopped on a random audience member. An actor’s voice could be heard describing the way that person could be thinking, presumably gathering information by observing body language and facial expressions. There’s no doubt it made me feel slightly uncomfortable, would it be my turn next? If so, how did I look? I don’t really fidget that much surely? As the screen changed picture frames, there is the realisation that we had in fact all been filmed since our arrival, caught totally unaware with no time to prepare, our flaws well and truly on display.

There then followed a deranged fashion show, the actors doing a makeshift catwalk in coats and other garments whilst giving a running commentary. The catch was that these had allegedly been taken from the theatre cloakroom. Bags were interrogated and the contents taken out one by one, a personality assassination followed.

The atmosphere took a darker tone as an actor approached an audience member and asked her to “spread her legs”, even offering her money if she would oblige. 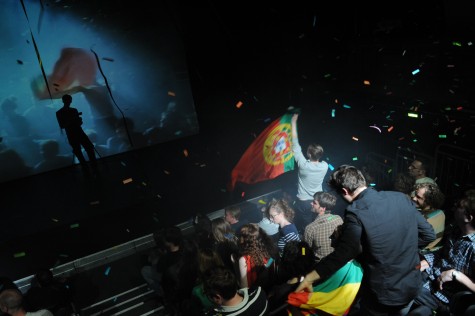 He examined the reactions of both the victim and everybody else in the room. Just how far could he go? There was an awkward silence initially; some still lay silent whilst others struck out in support, typical crowd behaviour when you think about it. Somebody got up at the back and an intense debate about ethics took over the room. I felt that this was a part of the act, nevertheless it certainly added to the dynamics of the performance. Thinking I had got away with it, the next session was the interactive part. We were shown how to clap in a certain way and perform certain rituals. The screen then transformed to a giant music video with instructions about what to do – such as dance, sway your body or shout out loud. As you’d expect, some people clapped and some didn’t, a few people sat down the whole duration whilst some got up after a bit of ‘crowd’ persuasion.

The closing piece of the show was footage of crowds taken from demonstrations such as the Nazi Nuremberg rallies. There was something that made me feel rather uneasy while observing those grainy images. Just like the people around me who didn’t want to dance or speak up, I was sure that many people in those rallies must have felt the same way. This implication made me think that if more people had stood up to be counted, things may have been rather different.

I can see the appeal of The Audience. It’s totally unique but it’s also one of those productions that should be seen quickly before it becomes talk of the town and frequented by the masses. The surprise factor and shock value is what makes it interesting. One can’t deny that the show certainly highlights differing behaviours, in particular how an individual ‘sits’ within a large group of people. There is also no doubt that you can learn much about your own ethics and prejudices. We are used to watching TV shows such as Big Brother or I’m a Celebrity but we do this while in the comfort of our own home. Here, the tables are turned somewhat but this is no bad thing.

For an hour, I was totally on edge, fearful of being singled out and having my ego bruised. How many of us feel this way when put in a similar situation? In a crowd we tend to feel ‘safe from harm’, allowing our self-constructed cocoons to take hold. It made me realise that many people are afraid to reach out from their comfort zones and would rather let others do the talking.

The shock value was not quite as bad as I had first thought but then 10 years ago perhaps it would have been. Human nature means we like to push boundaries with regards to what is considered as socially acceptable, so who knows what we could be watching in our theatres within another decade or so. In many ways The Audience does represent a sign of the times. During the performance we were given statistics about us such as “Twenty of you came alone”, “Five of you are homosexual” and “Ten of you are single”. Regardless if these were made up or not, things are already known about us before we have made ourselves known. Big Brother is well and truly watching…

The Audience is playing at The Soho Theatre until January 2012.