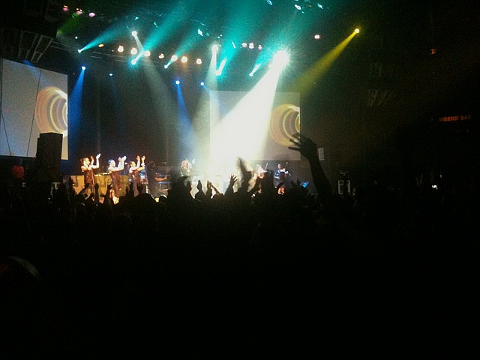 It’s a love thing for Beat this month and rather than go heart to heart, I’ve decided to go Soul II Soul. Music always has been the perfect platform to express love and all its pros and cons. We’ve been told about that first kiss, the break up, the re-unification and the joy (sometimes of breaking up) We have love ballards, lovers rock (reggae for romantics) and our own ‘top ten’ man/women hater iTunes playlist.

There is also the materialistic side of the word love too. The great American rapper KRS 1 once said Love’s Gonna Getcha, telling us how serious love really is and that its usage in everyday life has been taken way out of context. The song begins with the lyrics such as “I love my car”,”I love my chain” and “I’m in love with that girl over there”. He was trying to make a point of how the meaning of the word has become more meaningless over the years.

On a brighter note however, what better band to cover for our theme than one that has forged a connection through music, indeed through the love of it and love for the people it draws in. They say the music is the universal language and I can’t think of any other that brings people together from all walks of life so easily. As a certain Soul II Soul vocalist once said “It’s all about expression”.

I felt like Roy Neary stepping into the mother ship as I gazed up in awe at the huge circular dome of the Roundhouse in Camden. I tried to imagine what he must have felt like in the movie Close Encounters of the Third Kind, the dazzling lights and sub bass sound only adding those feelings.

There’s no Aliens around here tonight unfortunately, just the legal ones and we are here to witness the visitation of Jazzie B and his legendary band Soul II Soul transport us back in time to the late eighties and early nineties whereby he and his musical entourage practically created their own genre with its blend of dance music, rare Groove, reggae, soul, hip hop and African influenced sounds.

Keeping with the African theme, the band actually formed out of a night Jazzie was running at the Africa centre in Covent Garden during the eighties, where he and other DJs would play a melting pot of the aforementioned musical styles to an eager London crowd. Lest we forget the iconic dreadlocks and the equally iconic Grammy award winning vocalist Caron Wheeler. Jazzie is still known by his trademark tag, The original funki dread. The bands first Album Club classics Volume 1 is indeed a timeless classic and the cover was just as memorable as the groundbreaking music inside.

Bar Acid House, tracks such as Keep on Moving and Back to Life defined the sounds of many an English city during the summer of 1989.

Back to the gig and unsurprisingly it’s a full house in Camden tonight hoping for a Soul II Soul abduction and looking around me, the crowd is a bit more ‘mature’ which was to be expected. On the screens above the stage the iconic logo is being displayed in full force and the DJ is warming up proceedings. Legendary vocalist Kim Mazelle has just done a solo set and I’m hearing that all members of the band (including some of the original players) will be performing tonight.

After a brief musical intro from the band to get everybody in the mood, The Original Funki dred steps up on stage albeit with his Rasta hat on. He’s joined by Caron Wheeler who hasn’t changed much appearance wise since `back in the day` and they go straight in to the majestic song Keep on Movin. The crowd goes wild and everyone is singing along. He is also joined on stage by vocalist Rose Windross to perform Fairplay one of the more memorable cuts from the Club Classics album. Get A Life from the follow up album Club Classics Volume 2 and Missing You were also performed, the latter featuring Kym Mazelle and was it nice to hearLove Enuff which is a personal favourite of mine.

I assumed most people wanted to hear the ‘classics’ but there was time out for a while for Jazzie to showcase some of their newer material. Taking on more of a dub feel with a female MC to gee up the crowd, it was certainly a departure from their usual sound but in a good way. I could still hear elements of the original Soul II Soul sound within and it certainly didn’t stop the heads from bobbing away to the rumbling bass lines, funky riffs and soulful melody lines.

After introducing us to his talented band members, Jazzie was joined on stage by one of his more recent vocalists. Although she possessed an amazing voice, I thought the choice of tracks rather than her vocal talents took the atmosphere away slightly and this was noticed by the crowd reactions. Something more upbeat would have been better as this was the latter part of the set and it appeared that people wanted to dance. This was only a minor criticism however and after a quick break, Caron came up to perform Back to Life which whipped the crowd into a frenzy once again. It was also nice to see the crowd in the boxes above getting up from their seats and enjoying the moment. The 11 o’clock curfew came far too rapidly.

It was a great pleasure to see Soul II Soul live. Nostalgia aside it was very humbling experience to see them all in their full glory. That said people were there to hear the classics and who can blame them? They changed a lot of people lives and attitudes to music and I can still remember the infamous t-shirts with that famous logo being worn with pride by many a devoted fan. Should they come to a town or city near you don’t hesitate to go and see them, if anything, it’s a valuable history lesson in music and culture. After all, with an OBE, regular radio show, numerous hits and remixes to his name not to mention regular DJ appearances, one can’t underestimate what Jazzie has done for the music scene here in the past thirty years or so. An all “round” solid performance.

Reviewed for Beat Magazine circa 2011