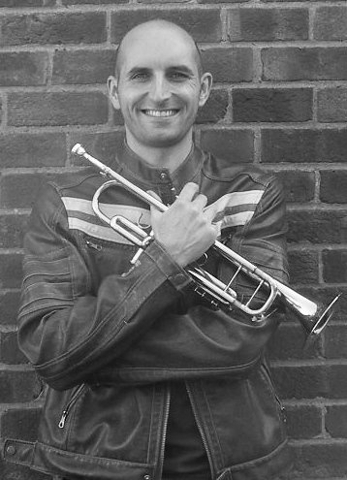 There’s not too many session musicians out there who can name drop a diverse range of talented artists they’ve jammed with such as Van Morrison, Lisa Stansfield, Burt Bacharach and The Hoosiers but Matt Holland would be happy to indulge. Hailing from Woodley just outside of Reading, he has been involved in music for most of his life taking on roles as band member, musical director (for Van Morrison) and music teacher covering the Berkshire area and beyond. Matt’s music has been featured on Jazz FM and his trumpeting skills have been put to good use for Grammy award-winning albums by Ray Charles and Daniel Bedingfield.

He has toured globally and has graced many a famous venue here in the UK including Ronnie Scott’s in London. He most recently played for Robbie Williams at the X Factor finals.

Matt, tell us how you first got involved with music. Who or what inspired you to learn an instrument?

According to my parents, I saw a trumpet player on Blue Peter and danced enthusiastically in front of the TV. After calming down slightly afterwards I said “Mum! Dad! I want a trumpet!”.

You’ve toured the world with the legendary blues band Van Morrison. Tell us about that.

I loved it, more than twelve years of amazing experiences including numerous tours and concerts worldwide. Between the ages of twenty two and thirty four, I had the luxury of cutting my teeth with one of the best song-writers ever. I studied music for fifteen years in Berkshire and at the Royal College/Royal Academy of Music in London. Despite this, I gained ninety percent of my musical knowledge from Van.

Tell us about your band history in general. Have you played at any well known venues in the UK or abroad?

Well, I’ve toured extensively in Europe, USA and also South America as part of a world tour with prolific vocalist Lisa Stansfield. Highlights would probably be the New Orleans jazz festival performing in front of one hundred and twenty thousand fans and doing coast to coast TV shows all over America. Van Morrison appeared on the David Letterman show which was viewed by thirty million people! I also took part in a song-writers hall of fame concert with Ray Charles with a mere hundred million audience worldwide!

As a regular session musician you get to work with all sorts of talented, creative people. Any particular favourites?

When you get paid for your hobby, every situation you get into is a pleasure. It’s true I have worked with many different artists over the years. Though a certain few may be a bit too ‘superstar’ for their own good, when you’re in the music business, things like that come with the territory. So, no regrets or horror stories I’m afraid!

What projects are you involved with at the moment?

I am currently on tour with soul singer Ben E King and then in May I start a theatre tour under the banner of Jazz Fm on the Road, which will be taking place at numerous venues around the UK featuring quality artists such as Jacqui Dankworth, Ian Shaw and Cleveland Watkiss.

Any solid advice to aspiring musicians?

Pay attention, don’t think you have to take drugs and constantly drink to be a rock star. Also, you have to put in a lot of hard work and effort then the rewards will come.

What’s been the major highlight of your music career so far?

I loved my work with Van and got to meet so many legends through him such as James Brown, Bob Dylan, Ray Charles and Doctor John. I remember a great show I did at the Royal Albert Hall in London with Burt Bacharach and also memorable performances at Madison Square Garden in New York, the Montreux Jazz Festival in Geneva and the Nice Jazz Festival.

You’re proficient in many instruments. Any particular favourite you like to play?

I play the trumpet mainly but I love to play piano and have started to enjoy singing in recent years.

You’ve played at many live venues in your time. Any funny moments or mishaps that you’d like to share?

Yes plenty, the usual Spinal Tap stories, they’ve all happened one way or another. For example, I was on tour in middle America somewhere and had turned up to witness the production manager going rather mental at the local crew. The stage plan was all wrong, there were risers, smoke machines, huge amp stacks and lights everywhere. He had them taking everything down until about fifteen minutes later when some bright spark realised we were at the wrong venue! We should have been across the road at the convention center with Van Morrison and had begun sabotaging Iron Maiden’s gig at the concert hall!

It’s your last few minutes left on Earth and you can play one last tune. What would it be?

That’s an easy one. That would have to be my new collaboration entitled Visitations with producer and DJ Pete Rann…

Article written for Beat Magazine circa 2011.