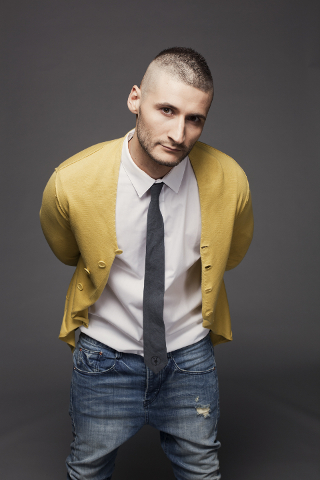 There’s a feeling of nostalgia among The Beat team this month. It plays a pivotal part in music and the scene that surrounds it. Music has the power to take us back to a certain time in our lives, both good and bad. When a record is played at a party or on the radio that we haven’t heard in a while, that feeling of youthful excitement returns and our surpressed alter ego in the form of “karaoke” suddenly awakens.

As I’ve got older, I’m happy to admit that I love music from the 80?s such as The Human League and Duran Duran. In the 90?s I would never have done so without feeling a bit embarrassed, perhaps I was to cool for school. More than twenty years have now passed and I guess the nostalgia virus has finally attacked me. Older and wiser, yes and maybe. Totally open about my quirky music tastes, most definitely and it seems I may not be the only one…

With a name like Kissy Sell Out it’s hard to erase from memory too easily, but his intentions are to remain a permanent fixture never to be forgotten. Since graduating in graphic design, Kissy has further directed his creative talents to become an international DJ, world renowned record producer and in demand re-mixer, not a bad manoeuvre to make from his humble hometown of Colchester in Essex.

Now over hundred shows in for Radio 1, he is still presenting his regular Friday night slot, playing a huge mixture of genres including electro tinged dance music, even classical and film soundtracks. Kissy also writes his own ‘Kissy club versions’ which are exclusive unofficial remixes just for the show.

Known for his high octane DJ Sets (Mixmag proclaimed him “one of the most exciting, charismatic and entertaining DJs of the decade”) and numerous official remixes for such artists as The Human League, Mark Ronson, Groove Armada and The Sugarbabes, Kissy has carved a name for himself as a producer to be reckoned with. Slicing up the all the rules in dance music and changing them as he goes along, his version of the aforementioned Mark Ronson’s take on The Smith’s Stop Me received much media attention and alerted the scene to his youthful presence. Kissy then went on to produce his first album, aptly named Youth (he’s still only 25) followed by a subsequent worldwide tour.

Fast foward to summer 2011 and there’s a new album entitled Wild Romance to be released on his label San City High. Using his bedroom as an office, he has employed his design skills to create all the necessary artwork and takes care of most other business himself; truly a master in the “art” of self-sufficiency.

With two recent back to back holiday weekends and a Royal wedding, no doubt this has been a busy time for you

I didn’t play out out much over the bank holidays but I have been busy finalising the artwork for the album and other forthcoming releases on my label. The CD cover is nearly done and I spent some time designing the limited edition coloured vinyl. It’s actually really time consuming, and going through the print stages is quite a complicated process as well. That said, I did manage to grace the turntables in Scotland last weekend, I played in Glasgow then Aberdeen.

You run your own label San City High. Tell us how its going.

It’s a wonderful experience. For the first time in my life it really feels like I have a musical family around. It’s changed me as a person, I’ve certainly become a man over the last year or so. San City helps in pushing new artists and we’re very much a fair trade label. We don’t licence people for the rest of their lives and we also make a point of not trying to rinse them for money or raise unnecessary paperwork. I’m not in this for money anyway, I do it for love. I came into the scene through the kindness of strangers who played my records, so now I’m giving something back. I’ve found that if you have a good attitude then there is a tendancy to meet equally nice like-minded people.

The label currently has events managers, publicists and admin, many of these people started off doing work experience. I think they look up to me as a bit of a father figure, so in order to be one, a good example must be set which I try and do and not let the low self esteem I once had get the better of me.

Your second album Wild Romance is out any moment now. Tell us more.

Well, my DJing is the best it’s ever been and we even have our own lighting production team with us now. I feel like I’m out there by myself, in my own zone as opposed to being a part of a specific scene which is a wonderful feeling actually. If anything, I’m a part of San City High and it’s been amazing to receive huge support from fans and listeners for something that I started out.

So in answer to your question, Wild Romance is a confident statement on what is happening in my world at the moment. I genuinely think it’s the best thing I’ve ever done. All the engineering and mastering was done by me and I took inspiration from my radio shows and the cross section of music that gets played on there. Half the album is made of complex melody lines and live instruments where as the other half is just banging! There is a real electro/speed garage vibe going on all the way through, some of the basslines are so big and heavy. I truly can’t wait for people to get this in their hands, it just means so much to me. I’ve made the album so it’s not hard to dance to either, there are some crazy elements in there that makes for a crazy record. I’m just so happy about it.

I can hear many genres that blend together to make up your sound. Can you tell us more about how you came up with your unique style of dance music?

First of all, I’m very proud to say that I’m one of the most obsessive music fans out there that you’ll ever meet. Apart from having dinner with my mum, even when I’m out drinking with friends, music is still on the menu and as I’m such a fan of other people’s music I use that passion to come up with my own ideas. I don’t really think about what I’m doing, it just makes sense.

I come from a small town where there is no scene as such so I had no one telling me what was cool and what to listen to, perhaps that’s why Kissy records sound a bit strange to everyone else! I love the dreaminess and clean cut sounds of the 80?s especially Scritti Politti. I loved the early energetic rave music from the likes of Slipmatt and The Rat pack also the energetic style of Jungle from the likes of Aphrodite and Micky Finn, the sense of tension in their tracks is amazing . The feeling of drama from speed garage also influences me and I like the dynamics of grunge too.

I’m notorious for saying that I HATE house music. I hate any kind of repetition, I can’t just sit there and listen to a record that goes on for 10 minutes and nothing happens, doesn’t interest me. I find that when making music, it isn’t always about giving something nice for people to listen to, it’s more of an experience. Some of the best music out there makes people feel a certain way and I find that concept really interesting. I guess overall, I’d describe my sound as electro meets speed garage with a bit of Vivaldi!

I’d say the remix I did for the All Saints. It’s funny but a lot of the kids that come to my parties probably haven’t even heard of them. It was a big deal for me as it was the first major label that I was approached by. I was just a youngster myself at the time, merely twenty years old, there I was sitting in my teenage bedroom and working on my version of Chick Fit. I still love listening to it now.

My other favourite is Things Dreams Are Made Of by The Human League. Imagine being a big music fan and then being asked to do a remix by one of the godfathers of synthesizer based music, one of the most extraordinary things that’s ever happened to me. Since then, I’ve met Phil Oakey in person. He actually said it was one of his favourite remixes, so to hear that from someone so influential in alternative music is a fantastic feeling.

Now you’ve achieved your dreams, I read that you like to help others and nuture new artists into the scene. What advice can you give to up and coming producers and DJs?

The first bit of advice I’d say is don’t copy anyone. You also have to really care about what you’re doing. One of the things I always do when I take demos off people, especially in person, is to look them in the eye and say “Is this the best thing you’ve ever done?”. I’ll be brutally honest and say around eighty percent hesitate and say they have other tracks etc, they then seem to deflate in front of me. I don’t want to hear a record that is ‘just ok’. The majority of music I do get sent is not so great or doesn’t push the right buttons but when I hear something that is from an obsessed, talented, exciting, motivated, ambitious, forward-thinking individual, it stands out by a mile and I just love hearing things like that, it makes my life much more interesting.

So to any producers reading this, make sure it’s the best thing you’ve ever done and that you completely believe in it. There’s nothing wrong with being inspired by other people. If you make dance music say, don’t go out and listen to that music all the time, instead listen to some wacky stuff, something a bit off centre, perhaps some acoustic folk or an alternative new age album for example. You need to know your current climate in a post modern sense. Some of the best records utilise this fact by taking elements from the past and using them in a new way. Once you have that big tune, send it to EVERYBODY. These days you have to be your own PR tool and it’s never been easier with the advent of social networking and the internet but at the same time the market is over saturated. As a summary, make sure you have a good product that’s something new and different.

Your gig diary is very healthy at the moment. Any memorable parties for you in recent times?

There’s been a fair few but I have to say Glastonbury last year was awesome. I played to over ten thousand people, I even played again the following night to four thousand which was promoted purely through word of mouth. I did a gig in front of thirty thousand people in Australia which was very cool and I also headlined at both Manumission and Amnesia In Ibiza. Overall, I like playing in the UK, it’s home and the crowds are always pumping. We did six ‘sell out’ parties at Sankeys Soap in Manchester which was also very special.