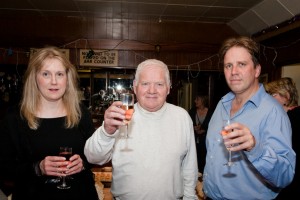 Some of us may already have enough drama in our lives while some thrive on it. I’ll take the latter approach especially after my debut attendance at the annual Windsor Fringe Drama Awards. Now in its eighth year, the concept is to give aspiring writers the chance to see their work brought to life on stage This year saw actress Jenny Seagrove and director John Adams take on the arduous task of judging the three finalists and the overall winner, whilst giving valuable feedback, encouragement and constructive criticism to the three finalists.

Each year, the event is proving more popular with many talented writers. There were one hundred and forty five scripts submitted from 12 countries all over the world including Australia, USA and of course the UK. The Fringe have a Drama sub- committee for the complicated organisation, with a carefully selected panel of script readers to narrow them down to a shortlist of nine which are then unanimously judged to the final 3 plays. Actor and Director Kenneth Branagh is the main sponsor, so support from such a prominent figure in the arts has added to the mass appeal of the award, meaning the standard is extremely high.

A good script requires quality acting and there were some stunning performances in front of a full house at The Windsor Ex-Services Club. The three shortlisted plays were No Occasion To by David Gerard Weir, Walking by Tina Jay and All Those Endearing Young Charms by Peter Harrison. No Occasion To told a story about a group of old friends who encounter a lonely stranger in a bar. The trouble was that Jamieson, expertly played by Paul Norton, seemed to know more about their past than they did of his; an excellent opening to the awards. I was particularly drawn to the second play Walking, about two prisoners sharing a cell and the power struggle between them. Jonathon Emmett played a convincing role as the dark, unforgiving character ‘Sleat’ whilst ‘Jamie’ the more timid and sensitive of the pair played by Jamie Benjamin did equally well, managing to create scenes of tears and sorrow with apparent ease. There then followed a seductive interrogation from three attractive young women in order to tempt Jason Denyer’s character ‘Clive’ – a businessman – to reveal the truth in All Those Endearing Young Charms. Indeed, it was hard for him to resist the feminine presence of Anita Gounder, Virginia Byron and Amanda Lara Kay; the racy script keeping male members of the audience entertained for a while. The winner’s identity is always kept in a sealed envelope until the night and was revealed to be Tina Jay for Walking, who received the £500 prize.

This certainly won’t be my last visit to The Windsor Fringe Drama Awards; I really enjoyed the engaging atmosphere and story lines. The audience participation ensures the event is always a sell-out. Anyone with an interest in theatre should go at least once, so make a note of it in your diary for 2012. You’ll be treated to a night of excellent drama executed by some of the best actors in the business. Let’s not forget the imagination and creativity from the many script writers who enter the competition, a good reason to make this one of the best cultural events outside of London.