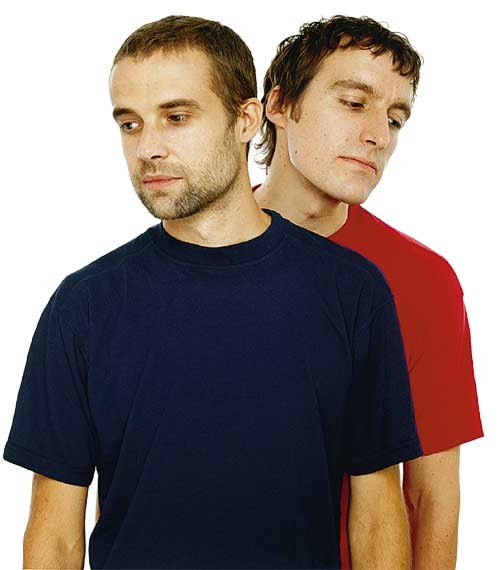 Ask anyone who knows a thing or two about electronic music and you can be certain that the band Plaid should come up in the converstation at some point. Production duo Andy Turner and Ed Handley have been making music for more than twenty years and have always remained at the forefront of the genre. Refusing to conform or follow trends, Plaid have never been afraid to experiment with their sound, always pushing boundaries and managing to create a palette of etheral synth sounds and lush soundscapes which demands complete attention from the listener. The band came to life in the early 90s having been former members of another legendary electronic outfit The Black Dog and both have also recorded under separate guises; Andy as Atypic and Ed as Balil. They are still signed to Warp Records but their work has also appeared on Carl Craig’s Planet E, Kirk DeGeorgios’s ART and other similar labels.

A big turning point for Plaid was when they were introduced to Bjork who unbeknown to them was a huge fan. She invited them to tour with her around the world and this lead an ongoing working relationship. The band have also collaborated with vocalists Nicolette and Mara Carlyle.

Plaid released their 6th Sudio album Scintilli last year to critical acclaim and have been constantly touring around the globe with their unique live shows, giving their loyal fans an audio and visual experience by way of animation often supplied by video artist Bob Jaroc. In reference to the latter, the boys also released a CD/DVD entitled Greedy Baby via Wrap Records in 2006 which contained new material and visuals to support them. They have also composed musical scores for the films Tekkon Kingreet, Heavens Door and other subsequent productions by American born director Michael Arias.

How’s the touring for your new album Scintilli going?

It has been a while since we toured so intensively as normally we tend to be more sporadic but for the most part its been rewarding and exciting. Highlights for us were London, Tokyo and Zurich and it’s been great to see so much support from the fans.

Listening to Scintilli, the original Plaid sound is still ever prominent. How has the reception been? What are your personal favourites from it?

The reception has been pretty good and we’ve had some excellent feedback and reviews. It is a continuation and hopefully a development of our previous releases. Our favourites for playing live have been Upgrade and At last, they always go down well at our shows.

As pioneers of electronic music, how do you feel the genre has changed over the last two decades or so?

I think it has spread and fused with other styles and the ‘electronic sound’ has become far more acceptable to people. Of course the arrival of new technology has certainly helped by allowing an even greater pallette of sounds to be used and being able to tweek these sounds to their full sonic potential.

How did you both get involved in making music back in the day? Tell us more about your history.

We were both really in to breakdancing and early hip hop music in the 80s. This led to an interest in samplers and synthesisers then to electronic dance music coming from America, mainly Detroit techno. This appealed because of its emphasis on harmony and melody.

Who or what inspires you to make your unique style of music?

As we just mentioned the original direct inspiration was Detroit techno with its evocations of isolation, futurism and escapism. Over time and having lived a little, the inspirations have now become more personal and experience based.

Do you spend a long time experimenting in the studio or do you have a certain idea in mind before you go in? Tell us about the creative process.

Much of it is playing around, either with sounds or patterns. When something stimulates us then we try and expand upon it. The ultimate aim is to make an involving, complete world of sound that we can live in for a while, or a track as most people call it!

Do you still use hardware or have you gone down the computer/digital route like many other producers? If not, what synths do you still like to use in your music?

We aren’t particularly nostalgic for hardware but for an analogue sound then it makes sense to use analogue equipment, if it’s affordable. Many of the software based devices around now are very versatile and sophisticated, therefore with the growing multitude of controllers, software is effectively becoming hardware. Having said that the noise, distortion and other artifacts of analogue machines are still attractive.

You’ve also done numerous remixes, do you have any particular favourites and are there any more in the pipeline?

At the time they are all our favourites! We have remixed for the likes of Bjork, Goldfrapp and Red Snapper and each one has been a unique experience. At the moment we are currently working on remixes for Origami Biro and Oberman Knocks.

You only ever really play out as a live outfit, what can we expect to see and hear during your sets? Do you improvise at all or is there usually a grand master plan to it all?

We try and do versions of released material with improvised elements and generally have tracks that are just for live which evolve each time we play them. We have a video machine that we use to generate synced visuals from an ongoing software project using a Quartz composer, Jitter and VDMX.

What does the future hold for you both?

We really just want to carry on writing music, playing live and getting involved with other musical based projects. When we finished Scintilli it was a fairly long gap since our previous album Spokes, so this time round we don’t want to leave it so long until the next. We are also really keen to compose some more film scores as that was a great experience and really enjoyable.

Written for Beat Magazine circa 2012