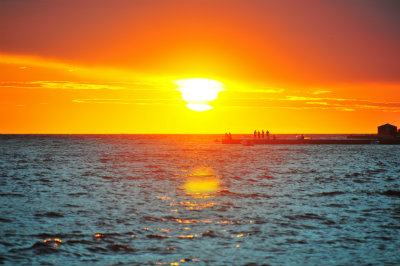 For those that would like to be a little adventurous in summer 2013, may we suggest a trip to Tisno situated on the stunning Dalmatian coast in Croatia where The Soundwave Festival will be in full swing from 18th – 22nd July; let’s take you there.

Now in its fifth year, the festival is a celebration of UK and international funk, electronica, soul and reggae artists spread across 3 outside stages; the motto is if you want to stay indoors, stay at home.

There will also be boat parties, after hour’s clubs and a private beach cove to soak in the electric atmosphere, not to mention the glorious Croatian sun.

Acts confirmed so far should be household names to the connoisseur – are you ready for this? So far Bonobo, Submotion Orchestra, Anchorsong and Craig Charles (yes, that one) will be topping up their tans whilst supplying the fellow sun worshippers with the very best in cutting edge music.

These artists are just the first wave so to speak. There will be more headliners making headway to the shores of Tisno, so keep a look out for anything unusual in the water and don’t forget to let the coastguard know.

Tisno itself is a picturesque town on the island of Murter which is connected to the mainland by a drawbridge. With a population of just 1500 people, there’s no excuse not to make new friends and there are numerous bars, restaurants, dance terraces and an open air cinema should you find yourself wanting to escape from the musical mayhem.

We can’t see why you’d really would want to leave however as the promoters will be providing an array of open air nightclubs and beach shaking function 1 sound systems to keep the sharks at bay; luxury villas and on site camping will be available to re-energise for the imminent night (or day) ahead.

Tisno is within easy reach to the traveller. A majority of low cost airlines fly to Split and Zadar Airports which are less than an hour away or there is the main airport Zagreb if you would rather fly to the capital. Tickets cost 119.00 pounds plus booking fee for the festival duration however the sharp movers will be able to acquire early bird tickets for just 85 pounds.