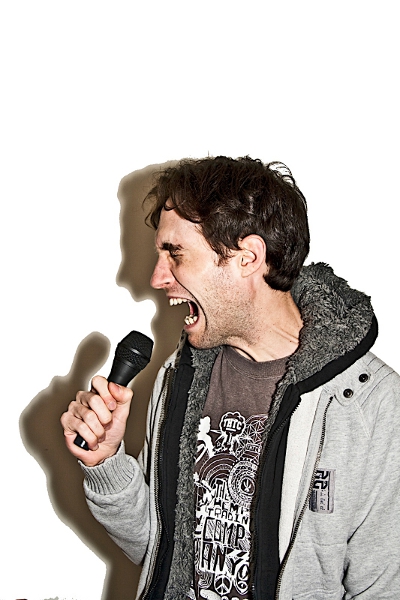 By the time you read this Beardyman will have played a sell-out gig at Koko in London. This is just a part of an on-going production line of live shows across the UK and indeed the world. Production line in the Beardyman sense certainly isn’t boring or repetitive and it’s this very reason why the crowds love him.

The man behind the facial hair, Darren Forman, is firstly an accomplished beat-boxer but his manipulations of these sounds and the ability to intertwine them with other sound sources has ensured that he remains at the top of his game.

Creatively there is no stopping Beardyman in his tracks and he is forever coming up with something new and exciting to keep the crowds entertained.

It must be said that he uses no pre-recorded material. All the sounds that you hear on stage have emanated from his mouth in one form or another and have been regurgitated using the most up to date technology.

Always injecting humour into his performance and not taking himself too seriously, Beardyman is capable of portraying a DJ by mixing’ his own personal dance floor rhythms and soundscapes, crossing musical genres with ease – this man has the control.

Since composing his own symphony at the tender age of 10, Beardyman has won several beat boxing championships and has ‘played’ alongside numerous well known DJs and artists within the dance music fraternity.  His name dominates festival flyers the world over and he co-runs the ground breaking night ‘Battle jam’ with DMC DJ champion JFB in Brighton. The night provides a fusion of musical styles be it funk, hip-hop, dancehall or drum and bass.

The only order of the day is that the sounds are to be completely improvised using newly developed technology that also enables some crowd participation.  Time to get a close shave with the man himself…

How are your live shows doing? What can an uninitiated person expect to see when they come and see you?

Well, I’ve spent the last 4 years designing, building and testing the live looping system of my dreams. I’ve been in hiding for six months finishing it off and getting it ready for live use. My shows are now different enough from the ones people are used to seeing. To be honest I’ve no idea how to summarise the changes in anything other than a series of lectures. But to attempt to summarise the capabilities of my new system – any idea I have can be brought into being instantly and with such precision.  When starting to delve into dance music, I have presets which work specifically for each kind of genre. These are not pre-prepared sounds but effects upon those sounds which mould and sculpt the sound into highly defined sonic textures specified for their type, genre and dynamic. So yeah, I improvise, I beat box, but not as you know it.

How did you get into beat boxing? Tell us more about the creative process and how you enhanced your vocal skills over the years.

Beat boxing has always been something I’ve done since a child. I’ve experimented with sound, played instruments, and produced music. I’ve always been fascinated with noise, voices and music. I have different creative processes for different kinds of music. I write songs and have done since I was tiny, many of which I’ll hopefully be bringing out next year along with music made using my new equipment. My vocal skills in terms of beat boxing have not progressed over the past 3 years as I’ve kind of given it up. It’s showing off, it’s pure avarice and not impressive.

It has been said that you were inspired by Police Academy star Michael Winslow. Has he acknowledged your success or even seen you live?

I’ve gigged with him a few times. He’s a really lovely guy, quite kooky and unusual, but really nice, really clever and really into “stuff”. He’s geeky about cameras and such. His wife’s really cool too. We all hung out and danced like idiots at The Chortle Awards recently.

Where else do you find your inspiration or ideas from for fresh vocal sounds?

I’m not so much into finding new vocal sounds anymore, beat box and noise making for its own sake is never that impressive to me. I’m more interested in what can be achieved using effects. Synthesis is basically effects on a source wave of some sort. I use my voice as the source and see what I can achieve by putting complex effects on it. Beat boxing only excites me when I’m stoned, which is less and less the closer I get to my inevitable death!

Your debut album I Done Album came out last year. Do you have plans for a follow up or any other future releases of any kind?

I’m just starting to record my next album now. I wanted to get the recording apparatus right first as managing my own sense of impatience is hard. This next one, god knows what it’ll be . . . we’ll just have to see. If it’s as eclectic as my musical taste then it’ll sell worse than the last one. So, who knows? Who cares? Albums don’t make money unless you’re Rihanna and I’m not. My foot hurts!

Tell us more about your current live set up; can you give us a small insight into what is happening whilst you’re on stage?

While I’m on stage, I’m mixing levels, composing melodies, free-styling lyrics, applying effects, choosing presets, executing builds, drop-downs, drops and writing songs. I’m also trying to entertain the crowd and MC whilst playing keys, an electronic drum and an iPad running a variety of programs. It’s not easy but when it works I get a lot of job satisfaction.

You inject a certain amount of humour into your sets. Can you tell us a particular story or funny moment?

Too many to mention. A personal favourite was in Wales last year when a women got her breasts out. I did a song about it and many others followed suit; that was fun, breasts are fun!

You’ve created and starred in many of your own videos which have garnered a substantial following on YouTube. Tell us more about those and any new ones to watch out for.

There’s more material on the way, concert footage and some videos showing my new gear; go to my website and see.

Can you pick out some highlights or memorable moments in your beat boxing world over the last few years?

Playing to 20,000 people last year at Bestival.  Playing to Al Gore and the minister of finance for China as the 2008 crash was happening. There have been many others but my memory is broken. I think I need a new brain disk!