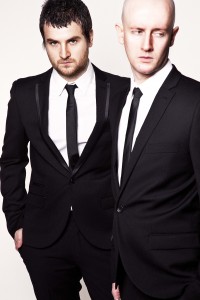 There could just be a new musical government in town. Once Russell Crank and David Cox have taken their seats on the throne, you can be sure of a summons to witness a dance music serving of the highest ‘order’. They’ll be no jesters in this court, the boys may not take themselves too seriously but they won’t be played for fools. The Autokratz as they’re better known certainly won’t play with fools either. Choosing such artists as New Order bassist Peter Hook, Andrew Innes from Primal Scream and Kasabian producer Jagz Kooner to collaborate with on their second studio album Self Help For Beginners, it’s clear that The Autokratz want to create an epic roundtable of dark electronics with a stab of multi-genre influences.

Of the collaboration Hooky said “I was delighted to be asked by The AutoKratz and knowing their music I completely understand why. Playing on the track was very easy and the boys made it very enjoyable. I’ve just listened to the track and then gone for a walk and found myself singing it over and over again – It’s great!”

The duo started releasing a string of dance singles a few years back on the french label Kitsune and their unique synth-driven sound soon caught the attention of the likes of Underworld and La Roux which resulted in numerous remix work and DJ guest appearances around the world. Their debut album Animal was well received and many of the tracks on it including Always More was heard in many a club back in 2009.

The new album shows The Autokratz going strength to strength, displaying maturity as they go. The debut single Opposites of Love is garnering attention from both Radio 1 and MTV. The LP will be also be a debut release on their new label Bad Life. So now, time to take a bow, offer a sacrifice and prove myself worthy for some time with the dancing dictators…

Tell us more about your new album Self Help For Beginners.

As well as our usual sound, it’s been great doing some wonderful collaborations this time round. The tracks we did with Jagz Kooner were unintentional to begin with. He hit us up on myspace (when it was used!) to say how much he liked the first album and I replied asking if he would like to do something with us, to which he replied with an enthusiastic “yes!”. We then went into the studio with him and started working on the trackKick. Getting a bit stuck midway through, Jagz suggested he bring down Andrew Innes to play, so that was another new trajectory to our musical journey. We were having such good fun playing with different artists. One time, Peter Hook was DJing at the same venue as we were and everyone got on really well. We had a track ready which suited his playing style perfectly so when we asked him to do it, that was another enthusiastic “yes!”.

Have you been touring to promote the album?

We haven’t started touring just yet in a big way, just dipping out toes at the minute. We took a break to make the album but did do a select few in May. Since the album has come out there are some up and coming gigs in London, Ibiza, Tokyo, Paris, Italy and Barcelona. Keep an avid look out in the ‘Dates’ section on our website for updates, as we have many more over the Summer period.

How would you say your sound has evolved since your initial releases and debut album Animals?

The first EP and the debut album were about discovering how things work, stumbling around in the dark which is great because you find your own musical identity. With the second album we’d already been on our musical journey and evolved so much that we know exactly the kind of sound to look for. The sentiments behind the songs mean more to us and more importantly how to express it and get things down in a concise way. Whilst you never stop learning or evolving, music by its very nature is always changing. Any band that keeps an eye on what is going on and is still inspired will continue to evolve in the right direction. We knew in our case exactly where we needed to go.

A lot of your music has a very 80?s/nu-wave feel to them, was this the intention?

Not specifically. I think it’s just the kind of sound we like. With the 80?s, especially the synths, they had such a raw feel, not as slick and polished as much of the modern music of today. The raw sounds appeal to us, of course we both like all sorts of different music from rock to Brian Eno and advant garde electonica. We never set out to be an 80?s cover band as it were, things just happened naturally. That said, New Order, Human League and other similar bands always appear on our playlists so I guess that kind of style will rub off on our music somewhere down the line.

You’ve just started your own label Bad Life. Tell us more about what you have got planned for it.

Having been on the label Kitsune for a long time, we were looking around at other people starting up their own and thought well, how hard can it be? Actually, it turned out to be very hard but that’s a different question altogether. We were getting a lot of demos sent to us by various producers of very high quality to add and they had never been released commercially. It would be fantastic for us if we could put out music that excites us and at the same time reach a much wider audience that they too could be excited about. Now this concept is a reality and we are really pleased with the results so far. The album will be released on the label and we have forthcoming releases from the likes of Sovnger, TWR72 and Attaque.

You’re also prolific remixers having tweaked the likes of Underworld and La Roux. Have you got any more in the pipeline? Any particular favourites?

For me, it’s our remix of Quicksand by La Roux. It also was really exciting to do Underworld and the like. I also have a soft spot for the remix we did for Aurora by Alex Gopher. Due to Album commitments, we have scaled back on remixes for a while but there is a remix scheduled in for Savage Skulls who are based in Sweden. Keep an eye out for this one over the next few months.

You tour extensively, can you tell us more about your live appearances and what the crowds can expect to hear?

Loud and energetic! We go out and play all our songs as if it’s our last hour on Earth! We’ve always loved playing live and never wanted to be artists that just stay in the studio all the time. It’s a real full on experience for us and rest assured we want to make it the same experience for the fans that come to see us.

What has been the highlight of your career so far?

Supporting the Prodigy in Tokyo was an awesome experience as was Underworld at the Brixton Acadamy in London, both bands mean so much to us. Managing to complete two albums has been a great achievement also, both of which have received critical acclaim thus far. It’s every musicians hope and dream to do an album which people can embrace with open arms, so that’s been a very humbling experience.

Do you have a set way of working together in the studio?

We are very much freestyle when it comes to working together. Russell has written the odd one by himself and sometimes I do too. We try not to go through the same process again and again as it becomes just like a cul-de-sac for ideas and therefore boring. You get sick of each other on occasions as it can get tiring bouncing ideas of each other and coming up with ways round certain things. So variation is the key and variety is the spice of life so they tell us.

Your music still has an electronic backbone behind it despite the fusion of other genres, who are your inspirations?

Many influences and inspirations but our biggest are Underworld, Kraftwerk, Primal Scream and New Order. The mix of electronic sounds and guitars has always appealled to us. Electronic music is so foward thinking and whilst I do love guitar based sounds, much of it is still stuck in old ways hence it can be very dull. When interwined with modern dance music however, it opens up a whole new musical palette and there really are no boundaries unless one makes it so.