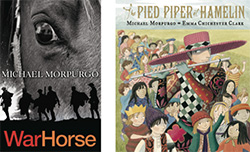 The war horses were out in full force on Tuesday night at the Theatre Royal in Windsor to witness acclaimed author Michael Murpurgo take stage to narrate his new take on the children’s classic The Pied Piper of Hamlin.

After a warm applause and light-hearted introduction, he was joined on stage by illustrator Emma Chichester Clark. Between them, they read through the entire story whilst a large projector behind displayed the artwork from the book. There were some nice musical touches from oboe player Jeremy Polmear and Michael’s vocal conviction kept things interesting. The overall story hasn’t changed too much; it’s a modern take on the classic, the notion of strangely dressed men taking children away not really cutting it in today’s world.

There were questions at the end and this was a perfect opportunity for Murpugo to gently tease the audience (he was once a teacher) whilst giving informative yet humorous answers such as refusing to tell a young boy the name of his first book because it was so bad and a certain young fan from China who had kindly addressed him as ’Morpingo’.

Unfortunately there were no book signings but judging by the crowd reaction it was clear that the author has managed to garner respect and admiration. With the continued success of The War Horse, there can only be more of that to come.

Published by The Windsor Observer.