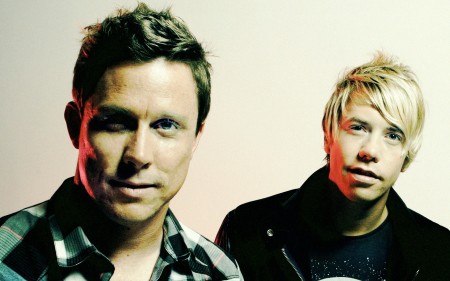 Quote Pink Floyd “We’re just two lost souls swimming in a fish bowl, year after year”. Maybe for some but not for Dominic Peters and David Poole aka Goldfish, a two piece electronic band causing major waves around the world right now. I’m sure Pink Floyd wouldn’t mind the mention, they’re actually self-confessed fans. They are just one of a long list of aural admirers including Pete Tong, Fatboy Slim, Faithless and a certain David Guetta who gave them a DJ gig worth swimming toward – a residency at Pacha, Ibiza.

Hailing from sunny Cape Town, the boys have risen from fairly humble beginnings. Both are classically trained and met whilst studying Jazz at UCT. They decided to incorporate their live instruments with modern electronic music and spent many a day combining their love of producing music and surfing.

The wind direction changed somewhat after they decided to write an album. Caught in the Loop was an instant success due to its genre defying sound and before they knew it, Dom and Dave were immersed in an ocean of success, navigating their way around the world with a fresh exciting sound.

With two South African Music awards (best dance album and producer) under their gills, platinum sales and sell out performances, Goldfish have reasons to be cheerful and it’s not just the warm climate.  Reference the latter; it seems that the sun has had a certain effect on one half of the duo. Dom is notoriously forgetful in the short term sense; let’s hope he turns up for the interview…

Things have become crazier as we’ve moved into 2013. We’re going to be releasing our new album and have just released our first single Take Back Tomorrow which is available to buy on itunes; that’s the first shot over the bar. The album will be out around mid – May and there will be a supporting tour to go with it. We have been booked to play at the Ultra Live Music Festival in Miami and a summer in Ibiza is also on the cards. Its pedal to the metal – touring, promotion and trying to spread the “fishy” word!

You mentioned the single, how’s the reception been so far?

It’s definitely an evolution of sound for Goldfish as we’re known for the live more jazzy sound. We’ve spent the last six years playing at Pacha in Ibiza having been in the thick of the dance floor. The new single has an energetic, harder sound but you know it’s still Goldfish. It has a very catchy chorus with a strong constant message behind it; a concept we always try and put back into our music. It also has a positive, optimistic feel because that’s what we’re about. We live in South Africa, we’re from a “funny” place but spend our summers in Ibiza and that shows through our music.

Tell us more about the new album.

It’s going to be called Three Second Memory and the title track will be released as single toward the end of March. I don’t know how familiar you are with our music videos but we do a lot of unorthodox film containing lots of animation. We’ve created an on-going story through them and the next single is going to be a continuation of that. We’ve received a massive response online and garnered a burgeoning fan base that are now waiting to see what will happen next. I’ve seen some of the work in progress for the next single and it’s hilarious. I think it will ruffle a few feathers in the dance music industry because it’s a running commentary to where we are at as far as electronic music and DJ culture.

What do you think has been the key to your success over the last few years?

I think, maybe its bringing people round to the same feelings we have. Electronic music is a little bit sterile at the moment in our opinion. It can be formulatic and many tracks just seem to repeat this formula. There is a very strong live element in what we do with live sax, double bass and flutes – we trigger all the samples too. Through doing this, we’re trying to bring the excitement back in to dance music and not be some random guy with his hands in the air playing records to an audience. We’re trying to bring that certain energy back into dance music and I think we’ve touched a nerve in that way. The one comment we have received from fans is “I wasn’t into dance music that much until I heard you”. I think we have injected the human element, soul and sense of fun into our sound that maybe alot of modern dance music doesn’t have.

You’re touching down in London, playing at Koko on the 21st February. What can the fans expect?

We always love playing in London. For us, the main thing about coming over to the UK is that we invariably end up playing to a South African audience! It’s great of course, don’t let me give you the wrong impression and it certainly adds to the energy. London is such a cosmopolitan city and KoKo is a very unique club to play at compared to other shows we do around the world. The fans can expect to hear a selection of tracks from the new album and we’ve actually just re-designed our live show. It’s going to be pretty awesome with a light show and visuals – a full on multimedia experience! We’re not looking forward to the cold weather though…

How do you work together in the studio?

Luckily, we’ve known each other for over ten years and studied music together. We were also both playing in various bands before Goldfish started. There is a very strong “jam” element to our song writing. I’ll start by sitting at the piano and begin tapping away at the keys or Dave will be fiddling around with his saxophone. Our iPhones are running on voice record constantly whilst we’re jamming so we can go back, listen and say “wow that was cool” and recreate the section in Ableton Live. A lot of the time, songs have spawned during live performances. Dave will shout across to me while I’m playing a riff on my keyboard and say “don’t forget that!” which I invariably do (laughs) but many of our best creative moments have often started out as small ideas.

What is the dance music scene like in Cape Town?

There is a massive scene here and we have of all kinds of electronic music. Living in Africa exposes you to an array of influences and it’s quite far from the scene in Europe which is a good thing and a bad thing. The best thing about being slightly detached is that it spawns some unique artists who are not necessarily looking for a top ten hit on Beatport. There is a huge deep house movement here and we have many dubstep/electro producers all making some interesting sounds; it’s very diverse.

Would you care to share a funny story or strange occurrence during one of your live gigs?

One that always springs to mind is when we were playing at a villa party in Ibiza that Pete Tong had booked us for. This blonde guy in his speedos came up to me, super friendly and said “hey, how are you doing? I’ve heard about this band Goldfish – I really like your music!” I said thanks and started making conversation with him after we’d finished playing. I said “what do you do?” to which he replied “I’m in a band”. I asked him what his name was and he said “Simon, from a band called Duran Duran!” It turns out it was none other than Simon Le Bon; that was quite funny and a huge compliment for us being equally huge fans. A lot of the bands seem touched by what we do because most electronic music they see in a live setting is a DJ with a lap top. They have a sense of kinship with us as we’re musicians coming in to an electronic world and they dig that.