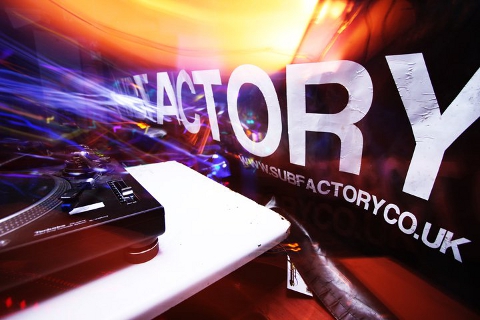 There’s the subway then there’s the substation, but there’s nothing quite as fast-paced and electric as Subfactory, Reading’s longest running drum and bass night.

Holding on for dear life whilst keeping the spikes at bay, it’s a frenetic musical onslaught taking place every Friday evening in the compressed but spacious basement of The Purple Turtle Bar. By no means Sub-standard, the two men behind the night Neil Mac aka Neil MacFarquhar and Greenfly aka Lawrence Green have been putting in the hard work and promotion for many years now delivering a free (did I say free?) quality night to satisfy the hungry music fans in the Berkshire area.

The night also attracts some, if not all of the top drawer DJs of the genre and most recently Fabio dropped in who, for those that don’t know, is one of the true godfathers of the scene and practically started it all.

So they must be doing something right, the salary, working conditions and pension plan must be good. I caught up with the boys recently to find out some more ‘substantial’ information…

Subfactory has been running for 6 years. Tell us how you got started and what motivated you to start you own night?

NEIL: It all started with Lawrence being offered a regular night at the club on a Sunday night, which isn’t the best of nights to run a drum and bass one especially outside London. He did his homework on me and walked into my record shop I had at the time, told me what he had in mind for the night and asked if I would like to be part of it. The rest as they say is history.

Motivation wise at the time there wasn’t much going on in town and what was going on was either rubbish or monthly events with the same old music policy. Since then we have moved to a Friday and that’s where we are staying.

Tell us a bit about the format of the night? What sort of a crowd do you get down there?

LAWRENCE: The night started off with a focus on the more musical/deeper sound in drum and bass but we’ve had to absorb various other styles over the years to keep it fresh and to keep people dancing. I think pretty much anything goes apart from the irritating mass-produced sound with no soul.

The crowd are brilliant, there’s always a great vibe and I’ve never seen any bad attitudes (something we don’t tolerate). It’s a party vibe for people that are really into the music and know the scene well. We don’t take it too seriously however. As for format, it varies. We usually have a special guest down at the end of each month and week-to-week we invite new talent to do a DJ ‘warm up’ slot for us.

You’ve had almost every big name in the drum and bass scene come down and grace the decks. Any highlights for you both?

LAWRENCE: Highlights for me were the first time that legendary producer and veteran of the scene Nookie came down to play. Then there was Maidenhead’s finest John B who did a Halloween special for us. Japanese producer Makoto and his MC Deeizm was a lot of fun too. There’s too many to mention to be honest. The Subfactory spin off in St. Helier, Jersey was also a great weekender.

NEIL: Yes, we’ve pretty much had the cream of the crop when it comes to headline acts. We’ve just had our 6th birthday with Fabio which was really good plus last years birthday bash with DJ Bailey that was also very special. Also a few others that spring to mind are Randall and Brian G. It’s always a good night when we ask Heist to come and play as he has been coming down from Colchester for a few years now. Subfactory actually gave him his first residency and we are very pleased for him that he has gone on to be a household name in the industry.

You’ve both been in the scene for a long time. Tell us a bit about your history.

LAWRENCE: When drum and bass really kicked off, I was playing keyboards in bands. I got a small studio together and started making my own music. I heard a mixtape someone had recorded off the radio and that’s when I decided what I wanted to write. I’d never been a DJ as such, only round friends houses and local parties so I came in from the production side of things. After releasing a debut album on DigitalUK (MilleniumRecords) in 2000, I carried on writing and I got a few tracks signed to LTJ Bukem’s Goodlooking records. We both now co-run a record label FF recordings (Frequency Factory) although the label is in a state of hiatus at the moment. I do intend to get it back on track real soon though.

NEIL: I first got into dance music pretty much like everyone else. I heard a mixtape by a friends older sister, went to a few raves and basically fell in love with the whole thing. I discovered the musical genre jungle in a back room of a club and that was it. I bought a set of decks and started DJing in my bedroom. I then linked up with a sound system in the mid to late 90s, promoted a few parties, played at free parties and a few clubs. I then started producing music with my brother Andy for my label Pandemic Recordings. I also helped veteran drum and bass producer Peshay produce a couple of albums on his label Cubik Music. I then embarked on a European tour. We covered Italy, Finland, Germany, Slovakia and I appeared live on a German TV channel. I also managed to DJ at some legendary clubs including Fabric, Movement @ Bar Rumba, The Brunel rooms in Swindon and Mass in Brixton. I have also become a part of an outfit called the Up Full Rockers on a label called Dub Dimensions.

A few years back Reading was home to one of the biggest dance music record shops in the UK, Basement Records. How do you think the scene has changed in the town over the years? Is the scene still healthy at the moment?

LAWRENCE: It’s definitely healthy at the moment as you can see from the amount of drum and bass events in the area now. People have seen that Reading is very passionate about this music and we still manage to fill the venue when other nights are looking to make a quick buck or name for themselves. Reading has always had a certain amount of underground music around but it was better 10 or so years ago in my opinion.

Now, venues just want to pack places out with people that like a drink, so there seems to be an abundance of soulless bars and chain pubs around. It’s lost a lot of character in a way so we try to keep things down to earth and dare I say it ‘real’. Music-wise, a lot of new talent has emerged from Reading and two of the largest distributors of vinyl are situated on the outskirts (one was born out of the legendary Basement Records)

What does the future hold for the night?

NEIL: More similar furnishings in our spiritual home, The Purple Turtle. Perhaps a one off at a different, larger venue would be nice. We would also love to put on a tour for the Subfactory crew to showcase us and the night.

What does the same future hold for you both as individuals?

NEIL: A lot of my energy goes into the night but I do have plans to get back in the studio with Greenfly and release new music on our FF Recordings label.

LAWRENCE: Agreed, more music production. A lot of the residents at Subfactory have enough talent to produce their own tunes. Some sing and MC over their own material so I’m going to try and promote that as much as I can. Many of them are artists in their own right.

Apart from the music of course, what else can you say about the night that would entice people to come down?

LAWRENCE: Definitely the atmosphere, it’s just a full on party with no frowning teenagers lurking in dark corners wearing caps and hoodies!

NEIL: Everyone loves the intimate atmosphere we create in the basement of the venue. When it’s at a peak both crowd and music wise, there really is no better place. Not to mention the awesome sound system which has a habit of thumping you in the chest, just what we like!

Finally, if you could sum up Subfactory in one word, what would it be?

NEIL: One word, that’s hard! What about family!