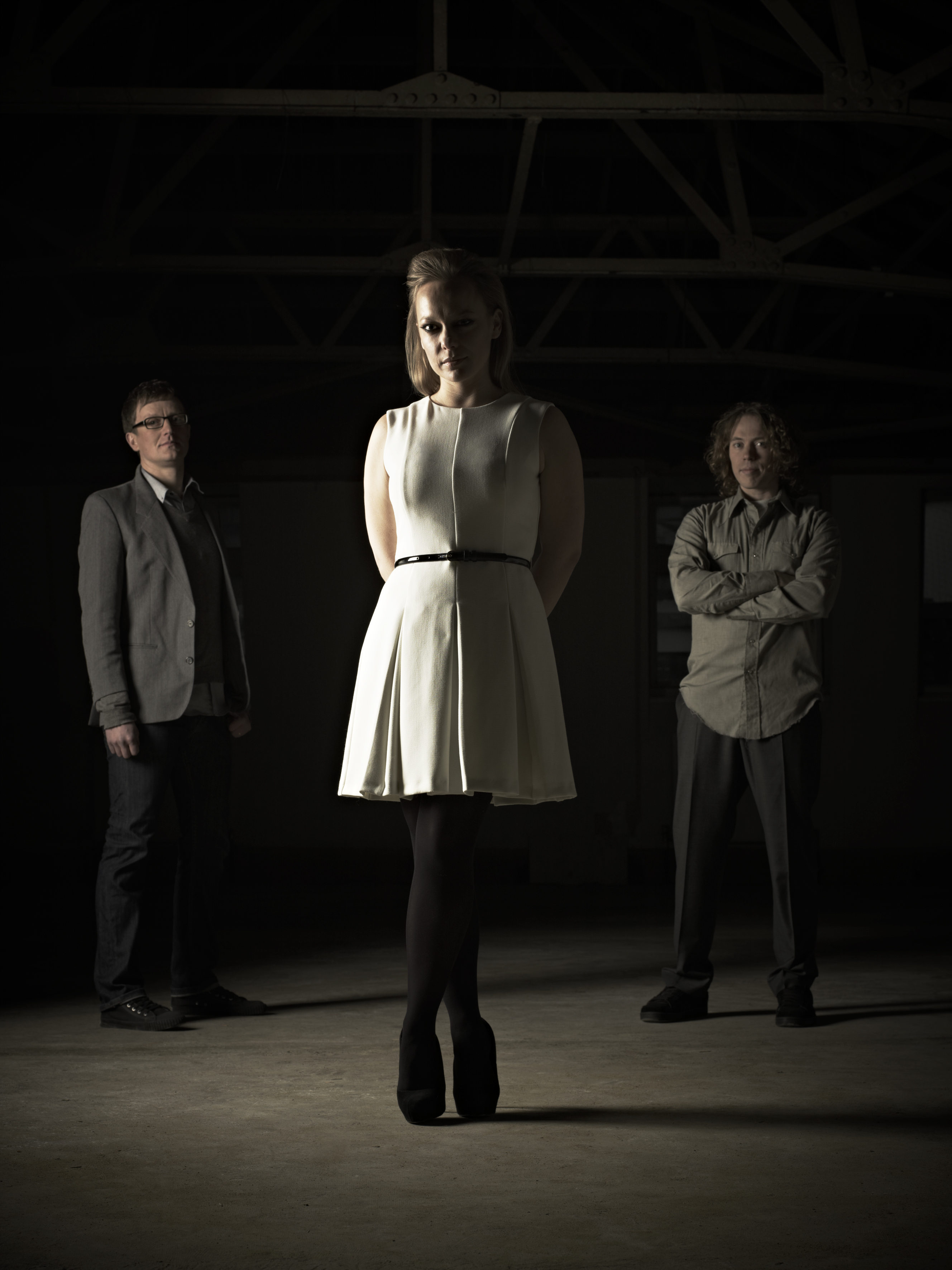 They say 3 is the magic number and this has certainly proved true for Kathrin deBoer, Ricky Fabulous and DJ Modest. These creative minds have had a spell cast upon them, bringing them together as one in order to become Belleruche, a band who exhibits a cauldron of musical diversity making them hard to classify or pigeon hole; even their Facebook fan page site describes their sound as “Glam hop. Prog soul. Industrial country”. On first hearing Belleruche, it is the soulful, blues tinged vocal talents of deBour that pull you in at the first listen with a hint of aggression and sultriness thrown in for an extra bit of attitude.

“Add an eclectic mix of lazy hip-hop beats, spaced out guitar licks, subtle samples and scratches that will make you well and truly itch, the result is a unique fusion of soul, funk, blues, ska and electronica.”

Comparisons may be made with Portishead, Lamb or Maloko but this can only be a mere datum point. Over the last few years Belleruche have been making a name for themselves. Having started out the ‘normal’ way playing at the back of half empty pubs and small venues, the trio have been taking their time, allowing their sound to blossom to its full potential and it seems the waiting game has been worth playing. Although Ricky and DJ Modest were making music together for many years as just two, it was the chance meeting with Kathrin which proved to be a pivotal moment. The band started releasing their music independently for a while before being snapped up by Brighton label Tru-Thoughts. Since then, Belleruche has gone from strength to strength, playing to packed out venues, releasing numerous critically acclaimed albums and even receiving interest from a well-known car manufacturer; proof that patience really is a virtue…

2012 has been pretty good so far. We’ve finished the new album Rollerchain and recently had it mastered at Transition in South London. It was pretty amazing to attend the vinyl cut and we’ve just got back the test pressings; they are sounding warm just like we expected. Tim (DJ modest) has done an amazing job on the artwork again, so it’s a pretty personal and special piece. We’ve always wanted to release a double vinyl gatefold album and since Rollerchain evolved, it was deemed the right time and album to do it.

You have an intensive touring schedule coming up soon. Can you tell us more about that?

We’ve been rehearsing for our upcoming tour in May and June. It’s our longest tour so far and is thirty dates across the UK and Europe. We’ve never taken this kind of time preparing songs for a live performance in the way we have been recently. We’ve been using the album tracks as starting points and rearranging them for live performance which has been great fun. Kathrin is playing bass in a lot of the new songs which has brought a completely new element to the sound and is quite exciting to hear.

Tell us more about the history of the band and how you got started.

Well, Tim and I know each other from our college days. Since then, we’ve been making beats, playing them out at parties and back rooms of pubs, anywhere that would have us really. We ended up with a residency at the Old Salmon and Compass in Angel, London every Sunday night. It wasn’t much more than us jamming around for hours on end, playing long tracks of cut up samples and guitar; the owner was cool about this but it was pretty self-indulgent stuff. We then met Kathrin quite randomly and she started coming down to the nights. That’s where learnt our trade and how to listen to each other. It was quite a different experience jamming like this live in front of people, albeit not many, as you have to think a lot about what you’re playing and how it works with everyone else. We then started getting booked for ‘real’ gigs and decided to start writing some songs. We always took it very seriously but never had much than a short term plan to things. We put out 3 vinyl records ourselves and then got approached about an album deal with Tru- Thoughts.

You’ve released three albums and your fourth Rollerchain is due for release shortly, tell us more about that and what we can expect to hear.

Making Rollerchain has been a fantastic experience. We’ve never taken time out from touring to write and record which we did with this one, and I think shows in the songs. Some people have said it sounds more dark than our other albums but I just think a lot more ‘true thoughts’ have been put into this album. Therefore it’s not really dark just more human, as it really reflects each of us for the period the album was written.

You’re next single Stormbird will be released on the 26th March on Tru-Thoughts. Tell us more about that.

Stormbird is one of the more experimental songs in terms of song writing and sound off the album. We chose it as the first single as I think it’s a good introduction, although not the most radio friendly. Each of us has shown a lot more interest in the album as a whole and not just individual songs. The album’s pretty varied but Stormbird represents this quite well.

You’ve been described by some as a modern day Portishead, how do you feel about this?

The Portishead comparison is very flattering as they were an iconic band for me as I was growing up. I think they influenced a lot of the music we each listen to but personally I’ve never listened a great deal. It’s Kind of hard to not be influenced by what they created with their sound but sometimes I feel the comparison is a little to do with our line up as a DJ/electronic producer, guitarist and female singer.

Who or what are your influences? What are you trying to express through your music?

Each of our influences can be pretty varied but we appreciate things in each other’s taste in music. I like lot of 8bit and Los Angeles electronica but that’s something I’ve got into over the last couple of years. I’ve always been into old blues music but I guess one of the common themes is simplicity in sound. I think each of us love how beautiful and evocative the space in music can be. I love the enigma of how you can just hear two notes or a simple melody over a bass line. I think it becomes a soundtrack to your imagination and it’s better when it doesn’t tell your how to feel but let’s you decide that for yourself.

We very rarely discuss what we are trying to say with our music but have an appreciation for what each of us contributes. More often than not, if one really likes something then we try and make it work for all. We’ve learnt to have a good understanding of what each of us is trying to say whilst giving space and support to achieve it.

How do you work together as a band in both a recording environment and live? Do you delegate certain tasks or do all the members have an input in the whole creative process?

Writing this album has been a great learning experience. There’s a song on the album called Cloverleafwhich to me, exemplifies this. It started as an acoustic song Kathrin and I wrote. I was never that happy with the chords but thought the melody was really beautiful. I then got to the studio early one day and rewrote the chords under the melody. Tim came in and played the said chords using a bass synth and then we set to work writing a whole lot of filtered percussion based material. We were both really excited then Kathrin came in and loved it too, we then pushed the song on from there. This is how we’ve written the album generally. The process didn’t just stop with an initial idea; instead we used the elements we liked and then kept pushing the songs forward until they really started to take on a life of their own. We had up to fifty versions of each song on the album that gradually changed into something that everyone was happy with. Even now, we’re writing new sections in order to play them live.

We each have a big influence on each other’s writing. We frequently take elements that somebody else in the band may have written and then edit them on the computer to produce something else. We’ve done this with everything on the album from guitar, bass, vocals and drums. It makes the melodies and rhythms less traditional and of haunting quality as they never quite sound like something someone would traditionally write.

What would you say has been your career highlights?

We’ve had a lot of career highlights but I guess the main highlight is just getting to do this full time. It’s a really privileged position to be in and we’re just happy that people want to hear our music.

After receiving numerous hits on YouTube, achieving single of the week on iTunes and Mercedes Benz using Northern Girls in one of its adverts, you must be quite pleased with yourselves. What are your goals and aspirations for 2012?

Everything is quite unexpected and things like YouTube hits and the Mercedes ad aren’t really things you can plan for. I feel a little sad when I hear people write music with a plan of it getting synced to an advert. I think it’s important to remember why we do this in the first place. It’s just something that each of us do because we enjoy it and in a weird way, we just have to as its part of each of us to write and make music.

When I was a young boy, music filled a gap I had in me. When it first got a hold, it was the one thing that had been missing which gave an outlet to the way I felt. That’s still the way I feel about it today and as a band, we’ve always fought hard to maintain that feeling about music and not let things change that particular feeling. I never listened to music and thought “that’s a great way to make money”, I just realised there’s a way to really express myself.

On that note, our aspirations for 2012 are just to keep making music. It would be great if the album went multi-platinum and I could roll around in money all day but we’re happy to visit places, play shows and keep exploring music and the way it makes us feel.