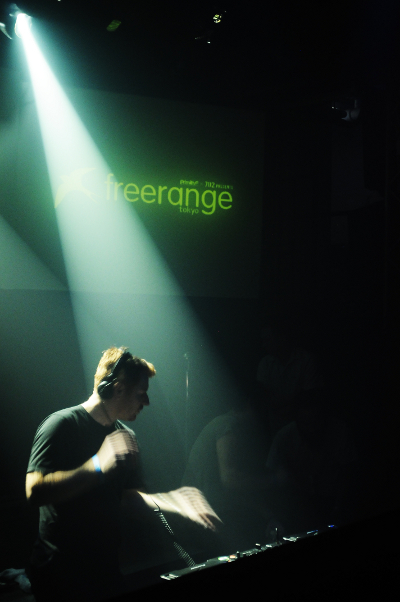 They say time flies and it certainly has for Jamie Odell, better known under his deep house alter ego Jimpster. It’s hard to believe that fifteen years have surpassed since Jamie started up Freerange records initially as a means to release his own material. Over the years, the label has garnered a word wide fan base showcasing a variety of quality electronic music from a wealth of talented artists such as Shur-i-kan, Milton Jackson and Swell Session.

Having been born into a musical family he started showing an interest in synthesisers from a young age and started to produce his own music which resulted in a debut release on Jumping and Pumping Records in the early 90s. From there, Jamie’s production talents went from strength to strength creating a unique underground sound with an influence of Chicago house, Detroit techno, soul and Jazz.

Apart from running Freerange, Jamie has released three studio albums as Jimspter, the most recent Amour having received much critical acclaim. His has also released slightly more dance floor orientated beats as Audiomontage with hints of nu-jazz and broken beats. For a number of years Jamie toured with The Bays, a collective of musicians who performed live sets without prior rehearsal or prepared material. Each piece of music was entirely improvised, drawing inspiration and ideas from the crowd.

Yes, my partner Tom Roberts and I set up Freerange in 1996 whilst we were both at college and here we are fifteen years later still releasing electronic music. We’ve survived against the odds having been victims of numerous distribution collapses as well as losing our entire back catalogue in the recent warehouse fires caused by the London riots. It’s no mean feat I tell you!

No doubt you’re having a prolonged birthday tour, where have you been playing? Where to next?

We wanted to try and do some nice label parties throughout the year, putting on more of a showcase together as opposed to just myself playing. We’ve had great events so far at clubs such as Trouw in Amsterdam, Smart Bar in Chicago and I Love Deep in Budapest. We also did on a very special one-off event in London at The Corsica Studios on 3rd December with Isolee and Session Victim who played live alongside DJ sets from myself, Andre Lodemann and Craig Smith from 6th Borough Project.

The label has gone from strength to strength over the years, any particular high points for you?

There have been a fair few high points whether it be discovering and releasing music from the relatively undiscovered (and now hugely successful) Switch, being awarded the best UK label at The DJ Magazine Awards 2007 and putting on successful label showcase parties at ADE and Sonar. The most important thing to me has been getting to work with some of the most talented and interesting producers making house music today.

You must be very proud running such a well-respected label. Tell us more about the other artists on board.

I am indeed very proud that we’ve managed to keep things going over the last fifteen years and built the label to the point where it is today. As far as our current artists go, we have Manuel Tur’s LP pretty much in the bag and due for release in early autumn next year. Lovebirds, Alex kid, Tony Lionni and Andre Crom all have upcoming singles and we’ve got remixes from the likes of Axel Boman, Nebraska and Radio Slave all being released in the coming months.

How did you start Freerange and what was the concept behind it all?

We started off the label originally as an outlet for my own productions which I’d been making during my time at college but soon started coming across like-minded producers up in Manchester that were mixing live musicians with electronic production while experimenting with drum and bass, trip-hop and house. Around 1996 the music and club scene was very open musically so there was a lot of genres and styles. We took our inspiration from labels such as Mo’Wax, Compost, R&S and Warp.

Under your moniker Jimpster, you’ve had string of prolific releases. Tell us more about your background in music and how you got started.

I grew up in a musical family with my dad being drummer for the group Shakatak and mum being a semi-professional jazz singer. From an early age I was spending a lot of time in studios where my dad would be recording so I would go off in a side room with a drum machine or synth creating sounds and rhythms. My dad also spent a lot of time in record shops so he would take me there and we would both grab big piles of vinyl to listen to in the booths. He was checking the latest Blue Note or ECM releases and I was listening to the Street Sounds compilations or early hip hop and synth pop like Lisa Lisa and Cult Jam, Whodini, Jean Michelle Jarre and Eurythmics etc. I soon developed a passion for electronic music which coincided with my love of breakdancing so I began making basic tracks on my ZX Spectrum computer hooked up to a Roland SH101 and TR808.

How do you work in the studio? Where do you get your ideas, inspirations and influences from?

My studio is pretty streamlined now with my old keyboards beaten up after years of gigging with The Bays so I just have a Mac running Logic, a Fender Rhodes and a few little toys. When starting a track, I usually take a selection of vinyl from my collection and sample a load of random bits to see if there are any strong hooks/loops or drum and percussion sounds. I find old disco, jazz and fusion (Lonnie Liston Smith or David Axelrod for example) the most inspiring in terms of sampling while the more static, clicks/ pops are better to get some dirt and grit in there. I build up a groove around some initial ideas and keep building sounds/layers into a 4 or 8 bar loop until there are enough good parts to start arranging the track which is always the hardest part. I guess that most of my inspiration comes from playing in clubs every weekend, seeing how people respond to certain tracks as well as being able to test my own potential releases on the crowd.

Your last album Amour did extremely well and showcased a diverse range of genres. Can we expect to hear a follow up next year?

I work really slowly in the studio unfortunately so LP projects are a real labour of love and can take me at least a year to get together. I’ve not really had the desire to try and do another one until quite recently but I’ve just started making some rough sketches of tracks with a view to releasing something late next year. Obviously my remixes and single releases tend to focus pretty much on deep house but I’m looking forward to branching out again and making some more experimental, down tempo and home listening music again as well as being able to collaborate on some tracks with vocalists.

How would you describe your club sets?

I play house music from right across the board but I guess the overiding vibe is deep, warm and underground.

What does the future hold for you as an artist and the Freerange label?

Hopefully, we can continue to build our fan-base by releasing top quality music from both new and established artists alike. Our Freerange podcast/radio show helps us reach out to countries that aren’t always possible to be playing live in, so this has become an important way that we can spread the word and help our music get heard globally. I’m looking forward to working on some interesting collaborations for the next Jimpster LP which is something I’ve still never really done. Hopefully, this will throw up some interesting directions for the music helping to keep thing fresh and appealing.

Written by Pete Rann for DMC World circa 2012