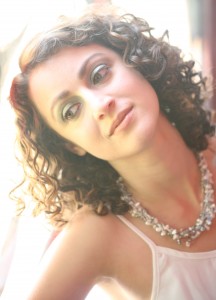 Having made her stage debut as a singer at four years old, it’s evident that Kaz Simmons has come a long way since. She has already released her third studio album Dandelions which according to her website “is a new departure” from earlier releases, so you’d better keep up with this talented young lady.


Originally from Brighton but now based in London, she continues to make serious impact both around the Capital and beyond with her mix of jazz, soul and acoustic blend of pop/folk influence.

On first listening to Kaz there’s no doubting her singing and song writing skills. Her voice is unique and there is a huge amount of intrigue contained in the way she expresses herself. Perhaps it was this reason that led to her being a finalist in the Jazz Connect competition which attracted 147 voices from around the world. After the release of her debut album Take Me Home on 33 Records, Kaz opted to start up her own label Fast Awake, on which both the follow up long player Different Smile and the more recent Dandelions feature.

Having performed nationally and more recently in the London area to promote the new album, Kaz is also putting in all the necessary PR work, making numerous appearances on radio shows and festivals around the country. So apart from her backing musicians, she really is a hard working one ‘women’ band and an accomplished guitar player (she teaches also). Time to pick Dandelions? I shouldn’t think so…

You’ve just done a launch party in Camden Town for your new album Dandelions, how did that go?

Amazing, it was sold out which was great. I played with a string quartet which I’ve never done before and we had backing vocals too. It was an amazing experience to play at The Forge (Camden), I had lots of goosebumps and everyone seemed to be enjoying themselves. It was a real joy to play there, I couldn’t stop smiling!

The album is out now, tell us more about it, what can we expect to hear?

It’s quite quirky I think and also autobiographical, mainly about my experiences. There are lots of strings and harmonies on there, trumpets, saxophones, all manner of different instruments and sounds. Because of this, I’d like to think the album has a big sound to it overall, although there a two tracks which are quite intimate where I just play the guitar. Dandelions has a wealth of influences as well, I used to do more jazz based singing so there are some elements of that in the album, also tinges of Brazilian music, Spanish guitar and folk.

You have a very unique voice, did you set out to sing a particular way or was it just a natural progression?

I don’t really force anything on my voice at all. I think mine is quite a bright and sparkly one, it just really sounds like me talking to a degree. I started singing from a very young age then studied the jazz form at University, hence there is bound to be that influence to my singing style. However, I never set out to have a certain sound, it’s all about being natural and what works best to suit me.

Did you find the musical diversity of Brighton helped nuture your sound whilst you were growing up there?

Not in a big way, I was more influenced by musicals as a child and studied classical singing. I started listening to artists such as Radiohead, Divine Comedy and Rufus Wainwright, I also really like Billy Joel and perform some of his songs in my sets. I did go to quite a few gigs in Brighton but that was more to see big bands such as Blur and the like when they were passing through.

You’re a songwriter too, how do you get your ideas together? Do you draw from your own life experiences?

I very rarely write about other people. I draw from my own life experiences and do sometimes ellaborate; most of the songs on the album were written over the last two years. Nice Life was one of the first things I ever wrote having been inspired by a gig I did in Bexhill-On-Sea. Pachamama was my experience of a trip to South America where I was blown away by the Andes and Peru. Some of the songs I write are also a kind of therapy for me.

Have you been playing many gigs and radio shows to promote the album, if so, any highlights?

Well, Jamie Cullum played Dandelions on his Radio 2 show which was great and I’ve been doing some studio sessions for Radio London. I also made an appearance at Radio Cambridgeshire recently and Marlow FM in Bucks. Quite a few radio stations around the country have been supporting me in general which has been really nice to see. I’ve also been doing lots of solo gigs and will be doing some sets with a band too over the next few months, in order to continue promoting the new album.

You’ve released two previous albums, one on your own label Fast Awake records. How was the reception to those?

Kaz: The first album Take Me Home, was a mainly jazzy affair. It was great to have it out there and got me known around the jazz scene at the time. My second album Different Smile was released on my own label Fast Awake Records. I decided to try things myself basically and managed to get distribution. By then, I was also playing guitar on all the recordings and had started to play live sets too. I really enjoy running my own label, it’s been a steep learning curve but all is going well.