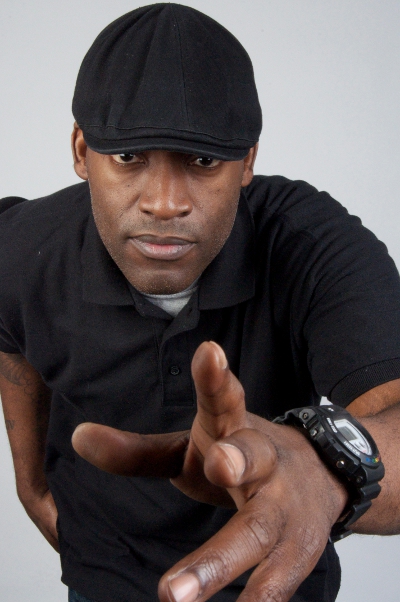 Anyone with sound knowledge of UK hiphop will no doubt be aware of Rodney P and the huge part he has played in bringing it to the forefront of British music. Starting out in the 80s as an MC with the hugely influencial London Posse, Rodney is highly regarded as a pioneer and ambassador for the genre whilst inspiring a generation of producers and fellow lyricists with his diversion tactics of keeping things homegrown.

Keen for the scene to be individual and away from the prying eyes of the USA, his diverse approach has seen collaborations with wealth of respected artists such as Bjork, Nitin Sawney, Roni Size and Roots Manuva. He is also in demand as live performer and has worked with Jay Z, Alicia Keys and Mos Def.

After success with The London Posse and the critically acclaimed album Gangsta Chronicle, his unique rap voice with its authentic English accent and reggae undertones saw Rodney go on to record with the likes of Uk hiphop act Black Twang, Omar, The Brand New Heavies and MJ Cole. Around 2000, he started up his own label Riddim Killa and released his long awaited debut album The Future. Rodney also co-hosted a hiphop show on Radio 1 Xtra entitled The Original Fever with long time cohort DJ Skitz. During this time, P became a spokesman for the scene, travelling to South Africa and Sierra Leone while also conducting short compelling interviews with hiphop heavyweights such as Busta Rhymes and P Diddy.

Gradually becoming more widely known as The Godfather of British rap, Rodney started to find himself the first point of contact for related media and televised discussions including Trevor Nelson’s ‘The Lowdown’ and ‘Soul Britannia’ hosted by Don Letts. He has shared his opinions to a wealth of music documentaries for both ITV and Channel 4. This widespread recognition has also seen him feature in the recent Toyota Yaris advertising campaign where he has provided the voice to the character ‘The Gadget Guy’. He still regularly appears as an in demand MC both home and abroad including the infamous Fabric Live in the capital.

No doubt you’ve had a busy summer schedule. Tell us what you’ve been up to.

This Summer has been a bit hectic having been on the road constantly and doing lots of shows especially with Skitz and the Dub Pistols which has been really good. I’ve also been in the studio, recording and getting some music done. I’m currently signed to the Tru-Thoughts label and have just handed in a new album. It’s a project called The Sleeping Giants which involves myself, Zed Bias and The Fallacy, that will be out very soon. I’m also in the process of finishing off my own long player and have just received the two inch reels of the original London Posse album Gangsta Chronicle, so I’ll be remixing that toward the end of the year. Lastly, we’ve just completed the new Dub Pistols album which is my ‘party’ oulet, a bit less serious than the others. It’s been good.

How does it feel to be known as the the godfather of British hiphop?

Yes, ok, I’ll take that! Personally I know myself that I’m not the first, I came into the scene and found good MCs already there. I’ll take the title primarily because I’m the only one who’s really still here so I can see why people say that. For me, UK hiphop existed before us. What The London Posse did was to change the attitude in terms of accents, to make it uniquely British.

What do you think of the state of the genre today?

I think hiphop as a music is good, it’s healthy. Hiphop as a commercial entity is all consuming, eating the airwaves and TV space. The problem is, you don’t get to hear any other types of hiphop music and that IS a problem. There is money being made of course from the commercial side but there needs to be more of an outlet for the underground sound, what I’d class as ‘real’ hiphop. These ‘top 10? RnB tunes you hear on MTV etc I do NOT class as hiphop.

As the London Posse you paved the way for British hiphop, tell us more about the early days and how you got started.

I fell into this music thing to be honest with you. Back in the day, there was no conception that a decent career could be forged out of making music especially in hiphop. It started while touring with Big Audio Dynamite, intially they had asked our friend Sipho to join them and he invited us to come along too. We didn’t even have a name then, it was just a group of rappers and a couple of dancers. I think it was around 1985 when things started to happen. During a trip to New York the ideas started flowing, we came up with the name and then toured around the UK on our return. The first record deal came off the back of these initial gigs.

What advice can you give to up and coming MCs?

Work hard and be brave, don’t necessarily try to fit into the mould as that holds back creativity and hiphop is about being creative. I feel that this is what is lacking in the commercial music we are hearing on the radio today. Don’t get me wrong, commercial music can be good and I do actually like some of it but try to take some risks rather than playing it safe just to be successful.

Who are what has influenced you to make music?

Everything. I listen to all types of music. If it’s on an emotional level, I’m there; Life, love, hate, war, you name it. That said, when I’m sitting in the studio I try not to be influenced too much, otherwise the music will not be coming from me. I can sit down and listen to Bob Marley, Gregory Issacs and Jimi Hendrix at home but once I’ve set a personal goal, I won’t be thinking about anyone else.

You’ve supplied the voice to the new Toyota Yaris Campaign, tell us more about that.

I was glad they asked me, it’s a very cool advert to be in. There are three actually and I saw one of them on TV the other day. When the guys were telling me what the car was capable of technology wise, I was quite surprised to be honest for such a small car. Music plays a big part of course and it’s hiphop, so what a great way to promote the genre to a wider audience. It was great fun and I really enjoyed taking part.

What does the future hold?

Music, music and more music. I’ve taken part in a new hiphop show on Bang FM which is based in London so listen out for that over the next few months. I’m also involved with youth charities which I’ve been doing for around a year now. I carry out talks and studio sessions with the kids to give them something else to look at rather than standing on the corner of a housing estate. The reality is there is not much for them to do, so it’s nice to offer some inspiration and opportunities.