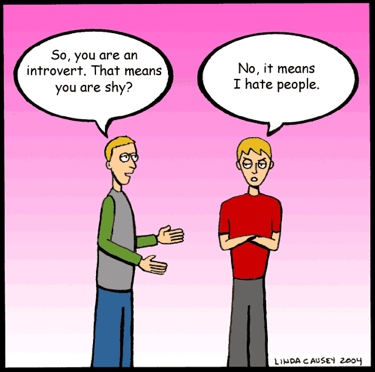 The difference between an introvert and extrovert personality

Are you normally a wall flower in a social situation? Perhaps you’re the life and soul of the party; you can’t wait to get out there and meet new people. Whether you’re the first type or the latter doesn’t really matter, what it does mean is that you possess either an introverted or extroverted personality. There are fundamental differences between them but the driving force for each is that the extrovert gains energy from things happening around them whilst the introvert gains energy from within themselves, are you still with me? Typically, extroverts are outgoing social animals and like nothing more than to spend time with people, getting a ‘buzz’ in the process. Introverts, who are more retrospective, may find these pastimes draining. They much prefer their own company although it’s important not to associate introversion with shyness as is often the case.

As I write this I’m currently reading Introvert Power by Laurie Halgoe, a writer, psychologist and part-time actor. This fascinating book takes an in-depth look into the introverted personality and how it manifests itself in what is a generally perceived as a more extroverted society. She challenges this assumption and goes on to suggest that more than half of the American population are introverted, yet most don’t realize it or haven’t even considered the fact. We have in many ways been programmed to think and believe that it is better to be extroverted, striving to be the life and soul of the party, aspiring to be popular amongst our peers. Staying in on a weekend? Surely not, we should be out with our friends and having a good time.

There’s no doubt that some of us enjoy our own company and would like to do nothing better than to indulge in solitary activities such as reading or writing. Yet a fair degree of social programming and expectations can make the latter seem unnatural, that it’s not good to feel this way, that we should be out there ‘getting a life’. Solitary endeavours are a good thing for certain personalities however and can also encourage personal growth. This is what the book is trying to convey; it’s all about who we really are by listening to our inner voice inside and not trying to be someone that society or other people want us to be. As a writer, music producer and engineer, I spent many years thinking I was an extrovert but as I progressed through book, the realisation dawned on me that I did indeed belong to the introvert club; more on that later. For now, let’s take a look in greater detail the fundamental differences between the two personality types.

It was Carl Jung, a Swiss psychiatrist that popularized the two terms. He suggested that everyone has an extroverted and introverted side although one being more dominant than the other. It’s also important to note that a person can sometimes deviate from either end of the spectrum depending on the situation. An introvert for example can be more than capable of handling a social situation but they simply need to ‘recharge their batteries’ afterwards. Generally, somebody with an extroverted personality will garner their energy from people and things around them, anything outside the self. They tend to excel in social situations and like nothing more than chatter and quick repartee. They are often the centrepiece of attention within a group and thrive on being around people in general. Typical characteristics include being assertive, enthusiastic and gregarious. Extroverts prefer not to be alone or boredom will set in quick. They will become restless and crave to have company. In summary, their life energy will be sapped if they become cut off from the outside world. Typical occupations for an extrovert are managers, public relation specialists, lawyers and political figures; famous extroverts include actor Robin Williams, business magnate Donald Trump and Oprah Winfrey.

The introvert on the other hand would be more than happy to seclude themselves from such external interruptions. They don’t need constant social interaction or to be surrounded by mindless chatter. For starters, introverts can’t abide small talk. If the topics are shallow, then they’re not interested in joining conversation; the latter is a distraction anyway. This personality type is primarily concerned with their own mental state, which is important as their life energy comes from within, the self. The introvert is often more reserved and quiet in a large group or gathering, they like to observe the nuances of social interaction in order to crack the code of human emotion; don’t ask why, it’s just the way they’re wired. It’s true to say that most introverts think before they speak or act. In fact, describing them as deep thinkers is merely scratching the surface. Characteristics of an introvert include a vivid imagination, being creative and independent. Typical occupations are writers, engineers, musicians and artists; famous introverts include Albert Einstein, actor Clint Eastwood and director Steven Spielberg. It’s also interesting to note that contrary to popular belief, public speaking fairs well with introversion as it gives the person a chance voice their opinion without interruption; there’s no shouting in order to be heard.

Having recently become a member of the introvert’s society, I thus began some retrospective thinking back to my childhood and the days of trying to ‘fit in’ with the mould. I can remember taking various personality tests at school, some based on the famous Myers-Briggs model which is designed to measure an individual’s psychological perception of the world. I never assumed myself to be a quiet person or a deep thinker as such. I was of an age where trying to impress and be popular amongst my peers was a high priority. I always chose the words ‘outgoing’, ‘sociable’ or ‘adventurous’ when describing my character, yet deep down I did feel slightly insecure and had a desire to withdraw; something wasn’t quite right.

As I grew older, I tried to be the centre of attention and the one to make people laugh. I wanted to gain approval from others. Admittedly I always felt drained afterwards, often feeling the need for some retirement to the drawing room for a while. I also remember travelling into London every week to buy records. I felt overwhelmed by the sheer amount of people around me and having to engage in social interaction whilst listening and deciding which ones to purchase. It was always a relief to finally come home and listen to them alone, a true breath of fresh air, a chance to play things over in my mind, a chance to recuperate once more. It was this experience that led me to becoming a musician and I was more than happy to spend hours on my own, playing with ideas and letting my imagination run wild.

When I look at the things I love in life now, all are solitary endeavours. I love writing music, writing and running. Don’t get me wrong, I like socializing but in small doses and with a small circle of friends; long are the days of trying to acquire a catalogue of social contacts. Of course, being in a creative industry does require a fair degree of networking. Luckily the advent of Facebook and LinkedIn has made the process a bit easier for the introvert, we feel more at ease in using these tools rather than going out every night to meet new people. Needless to say, I do enjoy being around them and like nothing better on a day of relaxation than to sit at a cafe, quietly sip my coffee and become lost in my own thoughts whilst indulging in a classic introvert pastime – people watching.

Extroverts and introverts can learn much from each other, each has their own unique character and skill; it’s fair to say that the world needs a combination of the two, the yin and yang as it were. We need a voice for the people, somebody who can speak up, lead and make important decisions. We also need a mind possessed of vivid imagination or creativity to give us pleasure and escapism through the medium of music or written word. The big question to you is: Are you and introvert or an extrovert? Look at how you live your life, the things you like, the things you do and how you view the world. Realise that it’s more than just round, it will allow you to be who you want to be without prejudice, it is your oyster. Look inside yourself and see where your heart truly lies, don’t put up a fight against your intuition or what you stand for. If you’re happy to be the quiet one, so be it; if you would rather stay at home, I commend you. Maybe you want to step outside, explore and meet new people; in which case go forth. Remember, don’t try and be somebody you’re not, be somebody you are.