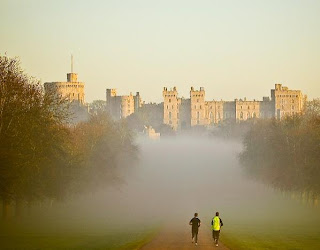 The words “never again” came into my head as I closed down the final mile of the magnificent Long Walk toward the finish which by the way never seems to arrive in this Royal Great Park of endless tarmac and greenery. One was certainly not amused.

I was taking part in the Windsor Half Marathon which is held annually in the Queen’s back garden that is Windsor Great Park in Berkshire. There was no mass barbecue or game playing on this typically British grey day, rather an immense kinetic swarm of panting bodies with goals in mind, personal achievements to be fulfilled or personal best times to be beat. There are creatures young and old, from every back ground they come forward, from all walks of life they come calling, supported by friends, families and mascots of gleeful cheer. Prior to the race, I shook hands with a runner at the start line, an old boy of sort who had travelled down from Brighton and we were graced with the musical presence of Fatboy Slim aka Norman Cook to “praise us like he should”. Michael Parkinson, who lives in the area was at the start line to kick off the proceedings, he has a special running squad who were racing for his particular charity. So, there was a flavoursome mix of celebrities and mortal runners all eager to set off.

This was the twenty eighth Windsor Half Marathon with a healthy (one hopes) number of participants always exceeding the five thousand mark. This is a very popular race due to location, proximity to London and the infamous finish where you do really feel like you’ll be joining her for afternoon tea. The one pm start is an annoyance to some (especially as last year was a typical September Indian summer day causing many runners to pull out due to heat stroke) but there are some advantages. One can afford to have a later night to bed the evening before if desired and there is no dreaded morning rush. A leisurely perhaps even a large breakfast can be consumed and digested in good time hopefully resulting in less cramp or pre-race indigestion. Facilities wise, there were plenty of marquees including massage tents, running shop vendors, fast food vans and bouncy castles to keep the young guns entertained. There were also no issues in storing bags and personal belongings which was quick and painless. The area takes up a majority of the park known as The Gallop which is nestled between the Long Walk and Queen Ann’s Ride. Think one vast clearing in the centre of it all. This enabled plenty of walking space and there was ample room to meander around in and out of all the various establishments.

The route itself is scenic, starting with a gentle jog (you have no choice due to the sheer number of runners at the start) with an incline towards the majestic Copper Horse and a left turn toward Bishops Gate, passing the Royal Lodge which was once official residence for the Queen mother and now to Prince Andrew. From there, a swift glide takes the participant on a loop around the back of Snow Hill and to a rather steep climb to the Copper Horse once again. Here, you are barely halfway, although the encouragement from spectators particularly at this stage is amazing and injects a much-needed lift of spirits to tackle the second half. The prior route is taken for a while until around mile seven whereby a detour is taken toward Cumberland Gate, passing the silent but proud white edifice that is the Royal Polo Ground. A nice run downhill from here is a welcome retreat to the fringes of Virginia Water. The loop back to toward the Copper Horse is a mixture of slight undulations and teasing hills, the water stations offer a comforting diversion. What makes this race special though is the finish; a spectacular view of the castle in all its glory awaits and the one mile downhill run toward it. It’s almost like a never-ending runway with a speck of a finish line in the distance which never seems to arrive. Due to the long walk being fairly minimal in width, this creates a certain closeness to the cheering spectators on either side resulting in a unique atmosphere. The pain is there but is certainly retracted somewhat and is a great distraction for the running minds and their depleting energy levels.

So, time to gather my trumpet and blow. How did I do? Well, last year was my first Windsor Half Marathon which I completed in two hours four minutes and in rather searing heat. Since then, I’ve completed three further races elsewhere including one abroad and have noticed an improvement in my times. I started off well this year, almost too well. I did feel I was slightly flagging during the second lap and practically walked up the last hill before the finish. Telling myself that I hadn’t beaten my personal best (1 hour fifty-five minutes) and that it would be good to just to finish, I was rather pleased to see one hour forty-six minutes in all its digital might, perched above the finishing line. My chip time was one hour forty-five mins, a new personal best. Thank you very much!

So apart from that last painful mile, I’d recommend anyone to take part in the Windsor running experience. After all, it is my local and I’ll always feel at home taking part in the Royal run. So, will I be doing it again next year? Just try and stop me…